A City in 2 Billion Points

July 31, 2018
In 2014 the Institut Cartogràfic i Geològic de Catalunya (ICGC) scanned an area of 1900x1200 meters around the La Sagrada Família in the city of Barcelona using a photogrammetric camera mounted on an aircraft. The resulting 2 billion point cloud was recently uploaded to Voxxlr and is now available online.

The Voxxlr processing pipeline applied various filters to the original point cloud before creating a packet stream that is transmitted on demand to the Voxxlr online point cloud viewer. It allows users to explore the scan via a standard web browser in a manner similar to Google Earth.

The image above displays the point cloud at different zoom levels in a top-down orthographic projection up to a resolution of 7 cm. While this view appears to be a 2D image, it represents only one of many possible viewpoints. For example, the image below shows a perspective 3D view from the Sagrada Familia looking towards the La Monumental arena. The structure in the foreground on the right is a spire of the cathedral. 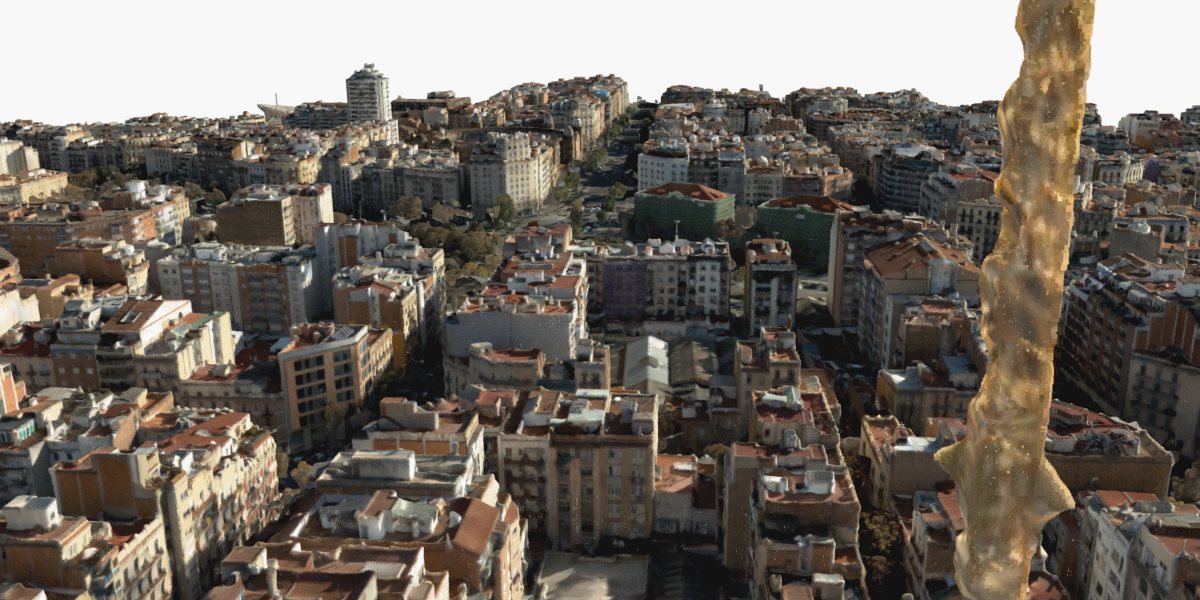 As part of post-processing, Voxxlr also calculates surface normals for each point. This additional topographical information supports powerful visualization and analysis methods. For example, the left hand side of the image below shows a city block in color. The right hand side shows the same block using black and white Phong Shading, which is a computer graphic illumination model based on how light reflects from surfaces. Note how the uniform illumination uncovers features which are hidden by shadows in the image on the left.

Lighting techniques can also be used to emphasize other attributes of the data. For example, the image below shows a colored section of the city followed by the same section illuminated using elevation as a color scale. The lower image reveals detailed structural artefacts and provides an impression of how much the Sagrada Familia towers above the neighborhood. It also reveals subtle elevation differences in the surrounding buildings as well as the slope of the underlying terrain.

Since the estimated surface normals capture the slope at any given point, it becomes possible to filter the point cloud by a specific inclination. In the case of a city, points with a slope close to 90 degrees are mostly part of building facades. In a top-drown orthographic projection, this filter effectively creates a street map as shown in the image below.

This article mainly relies on orthographic projections to illustrate the different visualization techniques. However, coloring and illumination are viewpoint independent, and can thus be examined from any 3D perspective as shown in the image below. Voxxlr also provides tools to define clipping planes, add annotations, take measurements and even import external 3D content such as architectural models. Since Voxxlr is based on the Google Cloud infrastructure, it can handle massive data sets and is available online 24/7. Soon, the point cloud processing pipeline will also apply clustering algorithms to automatically classify points into categories such as vegetation, roads, roofs etc. Stay tuned for another article presenting the results of this development.

The point cloud presented in this article is available online at Voxxlr, either in the easy to use viewer or the more comprehensive editor, where you can explore additional features. If you would like to experiment with your own data sets simply log in at www.voxxlr.com and upload either a las, e57, pts or ply file. For any question, please contact info@voxxlr.com.

Voxxlr is a cloud based service to store, analyze and share large 3D point clouds entirely online. After years of development, version 1.0 has now been released. A vibrant user community has already been uploading data sets up to 60GB and 1.5 Billion points. As a stable version of Voxxlr is now going live, the research and development effort towards new features continues. For an interactive demo of the Voxxlr editor and viewer, please follow the links below, ideally using a WebKit based browser such as Google Chrome. Voxxlr Viewer Voxxlr Editor In The Cloud Voxxlr is capable of processing very large data sets using the vast computing resources of the Google Cloud infrastructure. Once a point cloud has been uploaded and processed, it becomes accessible via a standard web browser running the Voxxlr editor and 3D point cloud viewer. There is no need to install additional software and you are always working with the latest version. Analysis Tools Accurate mea 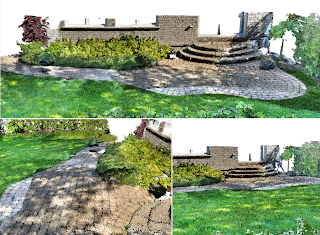 Low cost 3D scanning technology combined with the Voxxlr cloud based modelling software is a powerful new design tool for end users. This article illustrates how a scanning enabled smartphone can be useful in residential home design. The Voxxlr 3D Scanning App running on a Lenovo Phab 2 Pro with integrated Google Tango depth sensing technology was used to map an entire backyard in approximately 10 minutes at 0.5 cm resolution while collecting about 10 million sample points. The resulting point cloud contains a detailed description of dimension, topography and fauna, creating a realistic backdrop upon which to place additional content. The Voxxlr web interface was used to perform the design by taking measurements and adding content. Accurately scaled models of a pool and other backyard accessories were obtained from the public repository at 3D Warehouse. The following link leads to the final design in the Voxxlr editor where you can examine the site from different viewp